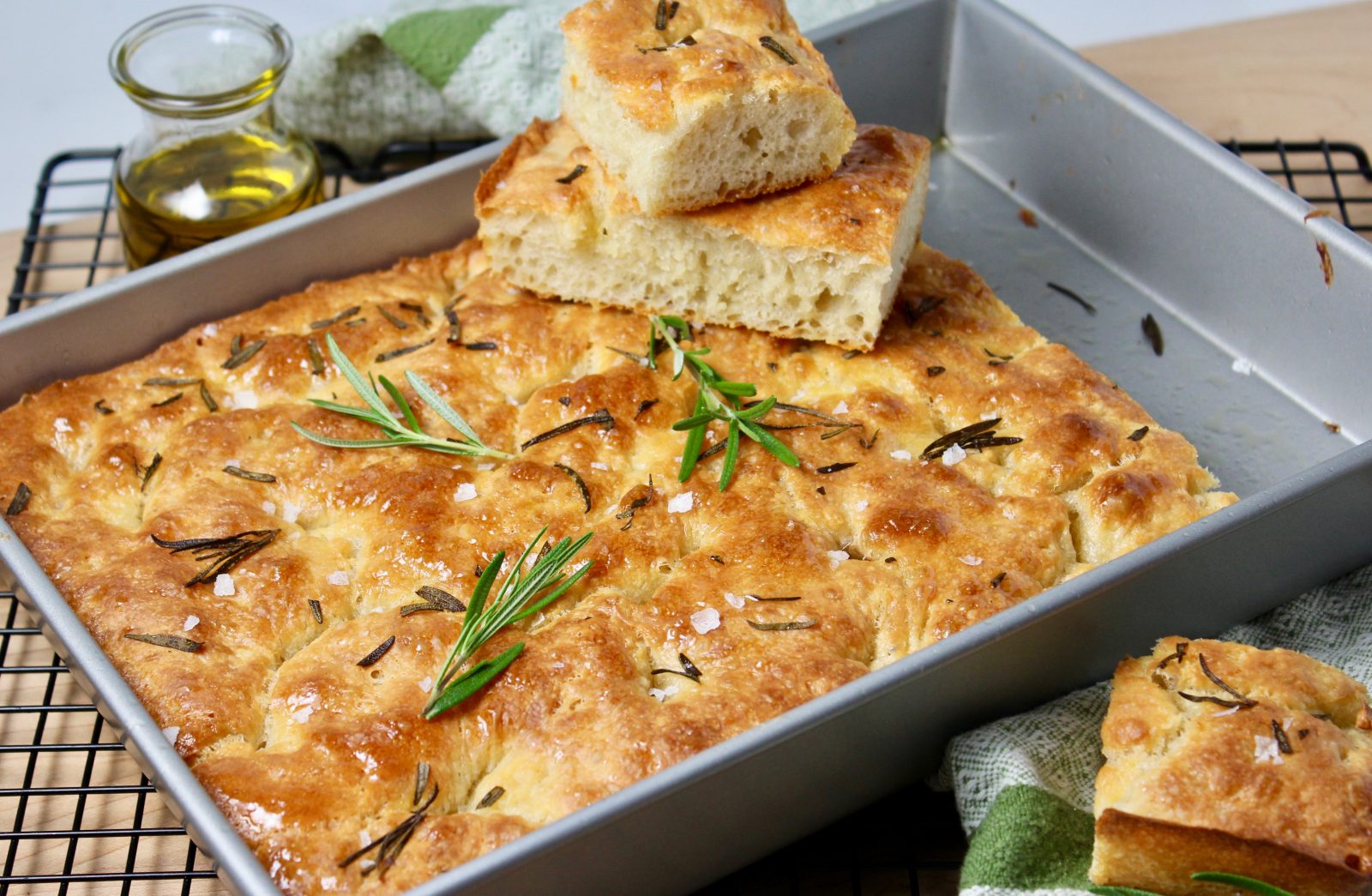 Focaccia bread is one of our favorites! The simple dough is flavored with olive oil and salt. Before baking it’s also drizzled with more olive oil – gives the baked bread a delicious crispy crust.

I like to sprinkle mine with some rosemary and coarse flaky salt before baking – more of a simple preparation. I’m sure you’ve seen all kinds of highly decorated focaccia loaves on the internet, they’re beautiful! – but personally, I don’t like to add too many toppings – wouldn’t want to interfere with the crust getting nice and crispy.

How Do You Enjoy Your Focaccia?

Focaccia bread is the perfect accompaniment to pretty much any meal! It doesn’t really need butter as it’s rich and delicious with the added olive oil. We love it with grilled meals, caprese salad and pretty much any soup or saucy dish you can dunk it into!

It also makes awesome panini sandwiches. Just slice your focaccia bread in half horizontally, layer in your favorite fillings and pop it in your panini press or griddle. (No need to brush with additional oil – it crisps up beautifully.) Lots of times we’ll eat half the loaf with dinner one night and have panini sandwiches the next night!

How Do You Make Focaccia Bread?

If you have a digital kitchen scale, I recommend weighing your flour – as it’s hard to be consistently accurate when measuring with a measuring cup. Stir together your dry ingredients. Add your warm water/oil mixture (not over 110 degrees F.)

Knead for about 5 minutes on speed 2. It will be a sticky/wet mixture, almost like a thick batter. It won’t form a ball and “clean the sides of the bowl” like some pizza and bread dough recipes. It reminds me a lot of the texture of ciabatta dough.

Let rise either on the counter or for several hours/overnight. Transfer to an oiled pan and let rise again. It will form lots of yummy bubbles.

Transfer the dough to a greased baking pan and let rise until doubled. Look at that gorgeous holey, almost lava-like texture with all those gluten strands!

Gently poke your fingers (dampened or oiled hands help with sticking) into the dough before baking, then drizzle with oil and sprinkle on toppings! Pop in the oven and soon you’ll be enjoying your delicious, golden brown and crispy focaccia bread!

Print Recipe
Focaccia Bread
Focaccia bread is one of our favorites! The simple dough is flavored with olive oil and salt. Before baking it's also drizzled with more olive oil - gives the baked bread a delicious crispy crust. 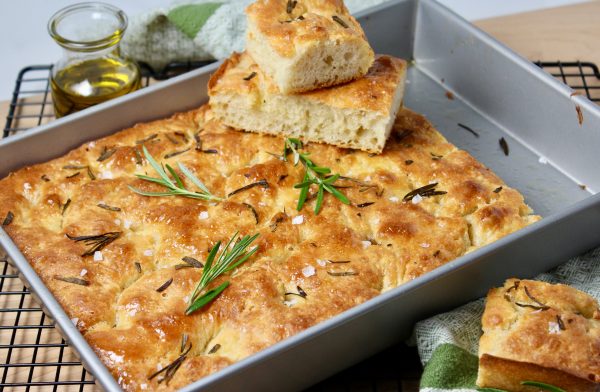 *Baking Pan: I prefer a metal baking pan for this bread, for some reason it really sticks to glass baking dishes.  You can alternatively bake in 2 nine-inch square or round pans.

**Coarse Flaky Salt:  If you sprinkle the top of the bread with salt before baking, the salt with tend to melt into the focaccia after the first day - making the top a little damp where the salt was - kind of like on a soft pretzel.  When I want to freeze the loaf of part of the loaf, I hold off on the salt.  If we're going to eat the same day, then I salt it.

Storage/Make-Ahead/Freezing:  Since this dough has oil in the batter, it doesn't dry out as quickly as some other breads.  It lasts on the counter for a couple days.  It also freezes well after baking.  Sometimes we'll eat half and freeze half.  I usually omit the sprinkling of the salt on top if I want to freeze (see note above.)  This bread also makes great panini sandwiches - which is great to make with any leftover focaccia bread.  Just cut in half horizontally, fill and grill with your panini press. 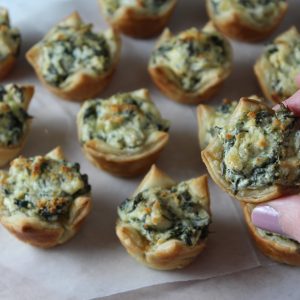 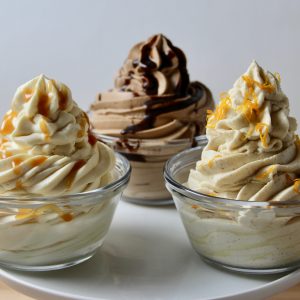 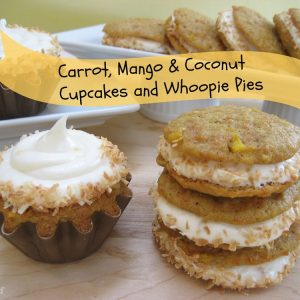 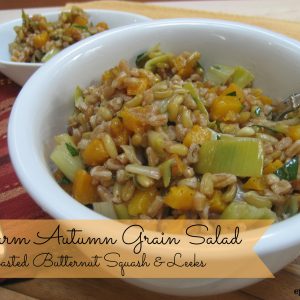 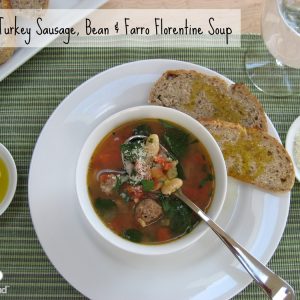 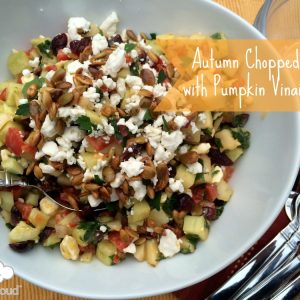 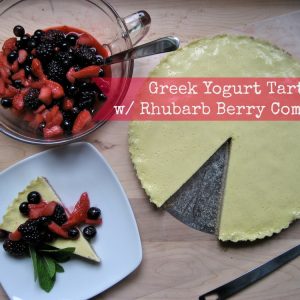 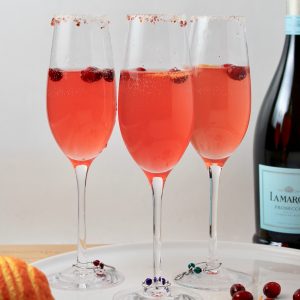